The 10th Anniversary Festival is an event that took place to celebrate Castle Age 10th anniversary.

The main event lasted from September 16 to September 22, 2019, while a few related minor events took place around it. 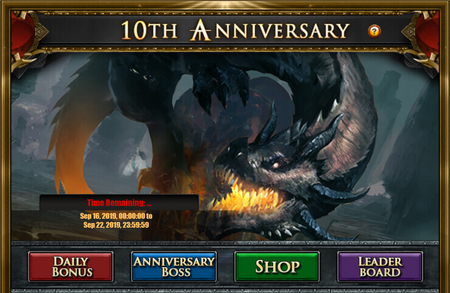 Here are the instructions given in-game:

During the 7 days of the event, you could collect new rewards each day. If you missed a day, you could also get the rewards of the missed day by using 10 FP on a following day.

After collecting the 7 daily rewards, the Mystery Gift was unlocked.

When hitting or healing Monsters, Anniversary Coins drops seemed to work similarly to Meteorite drops. The bigger the amount of Stamina or Energy used on a hit, the bigger the chance to get a drop was, with 100 Stamina or 200 Energy guaranteeing a drop.
Drops from questing probably worked the same way, as well as drops from Invade or Duel (but being 1 stamina actions, the drop rate was probably extremely low).

Getting x2, x4 or x10 Coins seemed to be random and not related to the amount of stamina or energy used, with x10 Coins dropping less often.

During the first two days of the event, Anniversary Coins dropped by 1, 2 or 5 instead of 2, 4 or 10 when hitting Monsters, questing or dueling/invading. It was probably changed because the community was complaining about the very high price of the items in the Shop compared the amount of Coins realistically obtainable over the course of the event.

This section is about the monster. For the hero, see Moonlight Dragon.

The Moonlight Dragon was a special Monster introduced for the duration of the Anniversary Festival. You could fight it once per day. It was a completely private Monster, meaning that each player had its own daily Anniversary Monster to hit and couldn't share it with anyone else.

For a total of 200 Anniversary Coins, 15 Refine Crystals and 15 Enhance Crystals every day for defeating it.

However, other than those rewards, hitting the Moonlight Dragon didn't drop anything (such as Essence), not even Anniversary Coins (while regular Monsters did).

Despite the in-game information stating that the monster's HP depended on the player's level, it was actually depending on the player's max Stamina. Or at least mostly on it, the player level or maybe his max Energy might have had an effect as well.

The Anniversary Shop featured items from past Arenas, Consumables, Hero Crystals, and Masilda. They were purchasable with Anniversary Coins.

Here is the list of all the items which were in the Shop (unless stated otherwise, the purchase limit was 1 item):

Throughout the event you could check your rank on the Leaderboard. This rank was based on the amount of 10th Anniversary Coins you had earned in total, and your rank at the end of the event determined the rewards you would get (similarly to how the Meteorite event works).

The 10th Anniversary Festival introduced the Moonlight Dragon general (and Masilda, through the Shop and Mystery Gift).

The rewards were sent out 24 hours after the event concluded.

A few ranks at the end:

On another note, this shows us that not much more than 300 players were able to afford more than one 6,000 Coins item from the Shop by the end of the event, which is why many found the prices to be excessively high.

Only the rank 1 player was able to afford 11 copies of Masilda and one of all non-consumable items from the Shop.

The Anniversary Chest is a special Treasure Chest which was put together partly through a community poll and introduced with the event. It was available only for its duration (one week).

It gathered mostly heroes from other chests, Legendary Generals, other special heroes, 3 Favor Generals (2 discontinued), and Consumables and Artifacts in the Common tier.

As it was introduced as part of the anniversary celebration, it had increased odds for the Epic, Rare and Uncommon tiers.

Masilda is the winning design of the "Create a General Contest" and was introduced in the game with the 10th Anniversary Festival.

The Anniversary Chest was put together by creating a poll on which everyone in the community could vote for the heroes they wanted to see featured in it.

Heed the Call from Valeria Campaign

The Heed the Call from Valeria Campaign was meant to bring back inactive players to the game, by giving rewards to both the returning player and the referrer.

The Anniversary Promo was a 120 FP Promo Pack featuring Gabrielle.

Retrieved from "https://castleage.fandom.com/wiki/10th_Anniversary_Festival?oldid=84206"
Community content is available under CC-BY-SA unless otherwise noted.