This article is about the monster. For the hero, see Azriel. 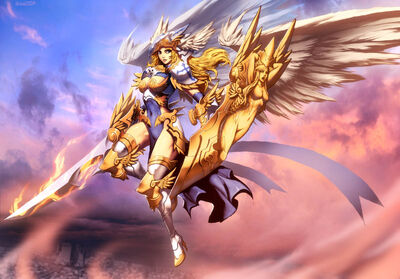 Azriel, the Angel of Wrath can be summoned on the Alchemy Summons page if you have the Orb of Azriel, which comes from the Kingdom of Heaven's Special Mission: Archangel's Wrath

You have 168 hours to complete the battle before she flees.

Participants: up to 135 people total, with the following distribution:

While fighting Azriel, there are 5 siege weapons that can be launched to deal extra damage.
All Siege Weapons hit Azriel and are unaffected by blocks and resistances.
*Azriel has 600,000,000 HP

Before The Quest: Archangel's Wrath

You finally make it to the main chamber and up above you can see a majestic angel floating above. It seems she is unaware of your presence but suddenly she starts to descend towards the chamber floor and stares at you with her piercing eyes.

Azriel: I was expecting you would eventually make your appearance in the Kingdom of Heaven. I suppose it was only a matter of time until you figured out. I was surprised that you were so quick to follow Mephistopheles through the Undead Realm and Underworld without even thinking of how vulnerable Valeria would be.

You: Who are you and why are you doing this? What is your connection to Mephistopheles?

Azriel: I apologize for being rude. I am Azriel, the Angel of Wrath. If you truly want answers, fight me and defeat me if you can!

Azriel swoops down from above with her mighty sword raised high. You are so mesmerized by the gracefulness of her flight and the speed at which she closes in on you that you barely have time to dodge her strike. As you roll out of the way and dodge the strike, Azriel is already on you unleashing a flurry of strikes. You are only able to parry a few of her strikes. As her blade breaks skin, a searing pain unlike any you have felt before shoots up your sides and takes your breath away. Azriels blade must be infused with some sort of magical energy. You struggle to stand on your feet but before you have a chance to fully recover, Azriel is again on you. This time Azriel begins to cast a spell and is surrounded by a shining blue light. She waves her hand in your direction and the ground begins to shake violently as if a volcano was about to erupt. The chamber itself feels like it is about to collapse on itself.

Suddenly, Excalibur starts to glow, similar to when you opened the pathway to the Kingdom of Heaven. You feel power course through your veins. The searing pain from Azriels wounds instantly subside and you are able to think clearly and focus on the matter at hand. Azriel herself seems to have slowed. Azriel again raises her sword for a strike. This time you raise Excalibur to easily block the strike. Excalibur cuts through Azriels blade as if it were not there. Azriel does her best to avoid your weapon as she twists away but Excalibur runs cleanly through her side. Azriel yelps in pain and grabs her side. She begins to bleed profusely and starts to lose the color from her face.

Azriel: "Impossible! No man-made weapon should be able to hurt an Archangel as myself. Only weapons forged from the Light or the Darkness would be able to harm archangels…

You: "I do not want to kill you! But you will force my hand if you do not tell me what your involvement with Mephistopheles is!"

Azriel: "As I promised, upon my defeat, I would divulge my reasons. Eons ago, when the continent of Valeria had just been born, there was a time of peace. The Creator was responsible for maintaining that peace. I admired the Creator for its fairness, its wisdom, and all its glory. Then on the fateful day, the Creator just decided to leave. Before the Creator left, it charged me with the responsibility to maintain that peace. I watched over everything and did my best to maintain that peace. As time passed, it became apparent to me that all individuals are greedy and thirst for power. Conflicts arise, wars break out. Pain and suffering are inevitable. Why should I prolong the inevitable suffering? Why not end all this suffering? My efforts to maintain peace were meaningless.

Over time, I realized that the intentions of Mephistopheles were the same as my own; to end the suffering. "

You: "Is that your answer? If it is, you are nothing but a selfish fool! Your actions are no different than a cowards. Mephistopheles is able to see the hatred within yourself and exploit it. Mephistopheles is using you as a puppet. Mephistopheles only wishes to rule over this world and cause more suffering. Although you may have given up hope, I will find a way. I will still continue to fight and break the cycle of suffering."

Azriel: "The life of a human is but a fleeting moment for beings such as us. If you have lived as long as I have, you would come to realize the futility of your efforts. I have no more attachment to this world and am ready to accept my fate…."

As you walk towards Azriel with Excalibur grasped firmly between your hands, the sweat rolls down your forehead. You wish it did not have to end this way. Then suddenly, the chamber begins to shake. The foundation must have been damaged from Azriels spell. It looks as its about to completely collapse. As you are running towards the exit, you catch a glimpse of the ground swallowing up Azriel into a fissure. Azriel is gone...

With Azriel now gone, you are sure the Kingdom of Heaven and possibly the rest of the world will be thrown into disarray. Your only hope is to find Mephistopheles as soon as possible and end this conflict. 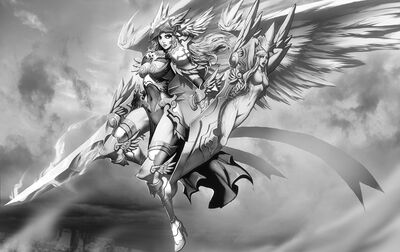 Estimated chances for a Legendary drop:

Retrieved from "https://castleage.fandom.com/wiki/Azriel,_the_Angel_of_Wrath?oldid=86751"
Community content is available under CC-BY-SA unless otherwise noted.