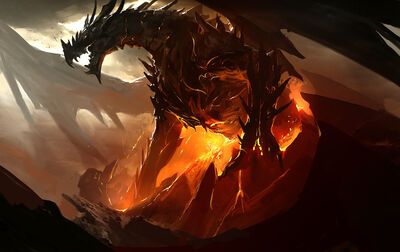 Bahamut, the Volcanic Dragon can be summoned on the Alchemy Summons page if you are at least level 150 by using 25 Energy or one Volcanic Egg of each color.

Participants: up to 110 people total, with the following distribution:

Unlike monsters from lower levels, Bahamut is a 2-bar monster: the red one for its life (which must be lowered to 0 to defeat him) and the green one for the party health. Whenever you attack, the party health gets lowered as if Bahamut were fighting back. You will only deal 100% damage when party health bar is maxed and filled; the emptier it is, the less damage you deal. When entering the monster, you can chose one of these monster classes:

While fighting Bahamut, there are 5 siege weapons that can be launched to deal extra damage.
All Siege Weapons hit Bahamut and are unaffected by blocks and resistances.
*Bahamut has 120,000,000 HP

"Yesssssssss!!!! I have escaped my prison in the Underworld! That fool Mephistophelesssss sssserved some purpose after all!"

You have summoned Bahamut. Request for assistance with this battle with a call to arms! Defeat Bahamut, the Volcanic Dragon now!

The clouds swirl above causing purples, grays, and blues to mix together into a giant vortex. The air seems charged with a dark energy that sends chills down your spine. The spinning of the clouds suddenly slows and they start to part. A massive arm reaches beyond the rift created in the heavens and comes crashing down to earth. What is this frightening creature? More importantly, why are these rifts being created?

Before you have time to think, another large arm reaches through the rift in the skies. Whatever it is, it is definitely massive. It slowly becomes clear as a silhouette of a large dragon appears through the dark skies. The creature lets out a loud roar that would make a grown man cower in fear. Never have you seen a dragon this enormous. The one makes all those Ancient Red Dragons you fought look like mere whelps in comparison to this creature from the rift.

Bahamut: "Yesssssssss!!!! I have escaped my prison in the Underworld! That fool Mephistophelesssss sssserved some purpose after all! I am free to destroy this world!"

Celesta: "I cannot believe it. How could this be…."

You: "What is it Celesta? What is the matter?"

Celesta: "That is Bahamut! My ancestors use to tell me tales a large dragon so fierce and horrifying that it almost destroyed our world. The story said Bahamut almost succeeded in this goal except he was sealed away in the Underworld by the great Elven Sage. I use to think it was a just a tale to scare young elven children. I never thought that it could be true…"

You: "How could this happen? If he was sealed away, why would he come back now?"

You: "How do stop this creature? It seems if we do not stop it, it will destroy this world."

Celesta: "The only person I know that has any knowledge of this creature and would know how to seal it away would be an elf by the name of Medius. He is one of the few elves currently alive that would have been there during those dark times when Bahamut last attacked."

You: "Please find him as soon as you can. We will do our best to hold Bahamut back but we may not have much time."

You gather your army around as Celesta quickly teleports away to an unknown location.

You: "We may not survive this battle but we must do our best to buy time for Celesta. She is our only hope. We must buy her time or it will be the end of this world as we know it. We must fight for our children and our future. I am proud to have fought next to such brave individuals."

Your army rides toward the mountain range from which the rift originated. The sight of Bahamut in the distance frightens even you. It's taking every ounce of courage to maintain your composure. If you were to ride away now, your army would quickly scatter and there would be no hope to hold off this creature.

Bahamut: "You silly humans dare to oppose me? Without that accursed Elven Sage, you have no hopes to stop me! I will crush you all before I destroy this insignificant world you humans call home."

Bahamut rises up and arches its back. It looks like he is about to launch some sort of attack! You signal to the mages to ready their Deflection spell. The mages all start to chant in unison and a large barrier starts to form around your party. However, before they can finish the spell Bahamut completes his attack. Bahamut spews molten lava from its mouth at your party. The lava hits the barrier. It looks as if the Deflection barrier will hold but wait…there was a portion of the barrier which was not completed! The screams of your army cut through the air and your heart sinks. The smell of burning flesh makes you nauseous but there is no choice but to carry on. The lives of your army must not be in vain. The clerics quickly cast heal on the party members who were injured and the party pushes forward. The warriors quickly take up the front lines to deflect Bahamut's attacks as best they can. Some of them fall but the party pushes forward.

It looks like Bahamut is readying for another large attack. You quickly direct the rogues in the group to charge and hopefully stun Bahamut before it can launch another attack. The rogues quickly dart forward and attack in a coordinated fashion. Bahamut becomes distracted as it tries to swat away the rogues as if they were nothing but small flies. It looks like the group of rogues have taken massive damage but they were at least able to prevent Bahamut from spewing lava again. This battle will be short-lived if Celesta cannot make it back with Medius.

Just in time you see Celesta riding toward the rear of your party with Medius by her side. Hopefully they will have the answers to seal Bahamut back in the Underworld. As you complete your thought, you are jerked back to reality by a loud screech from Bahamut. It seems it has taken notice of Medius and Celesta.

Bahamut: "THE ELVEN SAGE! HOW FOOLISH OF YOU TO SHOW YOUR FACE HERE. YOU HAVE SAVED ME THE EFFORT OF FINDING YOU SO THAT I CAN DESTROY YOU!"

As your eyes get heavier and heavier, you see Medius start a chant and create a large magical seal. Meanwhile, Celesta has created a large magical barrier to protect them as Bahamut continues his assault. A deafening roar is unleashed. Bahamut is writhes in pain.

Bahamut: "NOT AGAIN! NOT AGAINNNNN!"

The skies part again and large beam of light shines through. The rift from which Bahamut originated begins to open again. However, this time, Bahamut is raised into the skies. The sky has turned an unnatural shade of purple and yellow. Bahamut continues to resist but it looks as if Medius's magical seal has worked. Bahamut slowly disappears through the rift and after what seems to be an eternity, it is gone. The skies become calm and clear from the sky. The sun shines on your face. It is a comforting warmth. Your eyes become tougher and tougher to hold open. Celesta runs over to you. It looks like she is trying to talk to you but yet you hear no sound. Maybe it truly is the end for you. Your last moments were triumphant. You hope for a proper warriors burial and hope that they will sing songs of your name for generations to come. Your last image as your eyes go dark is that of Celesta's glowing hands hovering over your chest. 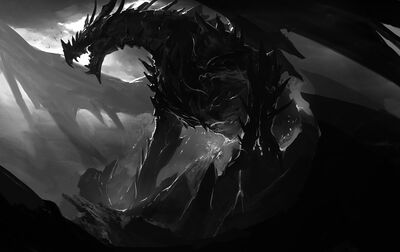 Unlike other battles, the effort of each level group is measured and affects the drop rate of each volcanic gem. Each gem has a base % to drop as loot once the monster is killed; those chances are increased when a group reaches the following amounts of damage (estimated):

Retrieved from "https://castleage.fandom.com/wiki/Bahamut,_the_Volcanic_Dragon?oldid=86706"
Community content is available under CC-BY-SA unless otherwise noted.