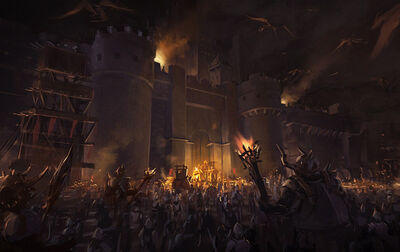 Battle of the Dark Legion (sometimes called the "Epic Battle against the Horde" and "Defend the Castle" on the summons page) is considered a world boss and was the ninth monster battle to be introduced. It can be summoned on the Alchemy Summons page by combining one Castle Rampart, one Angelic Blessing spell, and one Heroes Resolve spell. A player must be at least level 50 to be able to summon.

You have 168 hours to finish the battle.

Participants: up to 130 people total, with the following distribution:

Rewards while fighting the Dark Legion

Rewards after slaying the Dark Legion 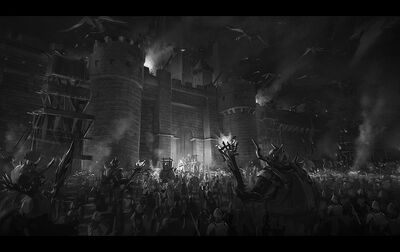 Retrieved from "https://castleage.fandom.com/wiki/Battle_of_the_Dark_Legion?oldid=80729"
Community content is available under CC-BY-SA unless otherwise noted.