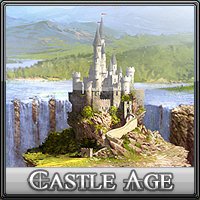 Castle Age is the Facebook-based game developed by Phoenix Age that is the subject of this wiki. It is primarily HTML-based and is only real-time for stats regeneration and battle, monster or raid time countdown.

Castle Age is integrated into Facebook such that you can only play the game from within Facebook and Castle Age has access to your friends and the ability to publish to their walls. Recently push publication (not initiated by some other Facebook user) from Castle Age (and all Facebook third-party apps) was restricted to e-mail and only when given permission.

The official forums are not integrated with Facebook in any way.

Nicely designed app for the iPhone (iPod Touch and probably iPad too). It has some limitations over the Facebook browser version, but is very handy when on the go. It *does not* require you to log into your Facebook account to play and you need an internet connection *or use your phone's data plan*, of course.

There should be a seperate wiki for the iphone app as it's very different then the facebook version and does not integrate with each other. A lot of the strategies based on the facebook app do not work on the phone as stated and these are critical pieces for some strategies.

Retrieved from "https://castleage.fandom.com/wiki/Castle_Age?oldid=76307"
Community content is available under CC-BY-SA unless otherwise noted.