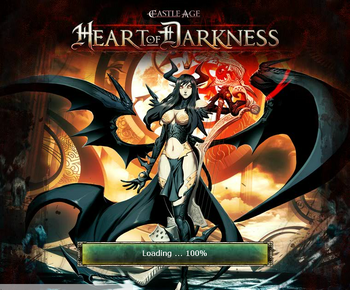 Castle Age: Heart of Darkness was a game by Phoenix Age that took from the original Castle Age game with a Flash layout.

It was launched initially as a Festival Game in the Castle Age Festival but was later pulled out and made into an independent game.

Allows players to vote for content they want to see next or issues they want addressed as priority. Must sign up first by confirming their email address they signed up with on Facebook. Once confirmed, they will be sent a confirmation code for validation. Once validated, they will be finally be an official Crusader of Darkness and give access to the Crusader polls.

Contains more detailed updates on the game. It may be additional content, bug fixes or outage and other announcements.

Visit the Heart of Darkness News Archive for the list of news announced on the game.

Contains the battle log of players challenging you in PvP duels. It displays how much damage you've taken and the amount of gold that you won or lost. You also gain experience points should you be victorious. Although it is not shown here, battle points are also won or lost should you and your challenger be near in rank.

Revenge button was added and will allow you to challenge back those who have challenged you in an attempt to claim back your honor, lost gold and battle points. See if their defense is as good as their attack!

Contains the Player's name, battle rank and stats (Attack, Defense, Energy, Stamina, Health). Players can allocate their stat points here. This is also where players can heal their health with gold. The currently equipped guardian is the one who will offer to heal the player.

Players can stash their gold here for a 10% tax fee. Guardian Persephone will help reduce the tax fee (up to -40% at level 4).

In case a player wish to use cash for either purchasing or healing, the game will not recognized any amount of cash stashed in the treasury, it will only recognized cash on hand rather.

The Town displays items you can buy with gold as well as other items that you own. You can see the stats of the items here. The guardian at the top is the one who is currently equipped.

Gather powerful guardians to join your forces! Each guardian has a different special ability to help you along with your journey!

Guardians are heroes in Heart of Darkness. Those who can be recruited by gold are listed in the Recruit Guardians tab. All guardians owned can be found and equipped in the Equip Guardians tab as well as the Treasury tab in the Keep. Guardians can level up to increase their stats and abilities. The maximum level a guardian can power up to is level 4. Some Guardians are attained by defeating monsters.

Guardians also have 6 Equipment Slots that can boost their abilities and stats. Equipment must be specific to the guardian. Equipped Guardians are also known as generals.

Here you can perform alchemy to create equipment or summon monsters which you can fight for loot. Alchemy page has two tabs: Ingredients and Recipes.

Ingredients lists all the alchemical components that you own while the Recipe page shows the list of items or summons that you can make from your alchemy ingredients.

Immerse in the game's story by expending energy in your Journey. Earn gold, experience and skill points to strengthen your character as well as items that will unravel the game mysteries. Each quest has 5 levels. Completing 1 level earns 1 Skill Point. The quest's flame will also change color according to its level. Higher level questing is only unlocked once you have completed the Land's special quest.

There are currently 7 lands.

Each stage has a special milestone quest. Upon finishing each milestone, there is an assured drop of an orb for a special monster:

This is where you can summon monsters to fight. It requires a specific ingredient to be able to summon a monster. This page also records your best time and damage against specific monsters.

When battling monsters, players use stamina to hit and chip away at a monster's health. For every hit, they will be able to log damage done depending on their attack power. The higher the attack, the higher the number damage (though irrelevant against stamina-based monsters). Players will also earn experience, gold and demi points for each click as well as lose some health. A minimum health of 10 is needed.

The monster must be defeated within the designated time limit in order to be eligible collect equipment loot from the monster. The higher the damage logged (or stamina invested) on the monster, the higher the chance to collect more rewards although there is a maximum limit to the number of loot that can be obtained per monster.

Links to Google Spreadsheet for monsters that show the chance of items at certain damage and info on mine quest and more: https://spreadsheets.google.com/spreadsheet/ccc?key=0AnliGwolxrpqdFQyLW5FUFpTcURuSEF1N0w4MTctLUE&hl=en_US#gid=3

Public List contains summoned monsters that are declared public. Players who have few friends playing Heart of Darkness can turn to public monsters to look for monster fights as well as recruit people to aid in taking down a summoned monster. Only the summoner is allowed to declare the monster public.

Be warned that even by making a monster public, it is not a guarantee of hitters coming in to help. Likewise, it does not guarantee that players who will join in will help kill the monster or respect other people who also joined. Example: there can be 10 people who will join but only tag (i.e. hit once then leave) which can compromise a kill especially against harder monsters. Another is when reaching a certain damage threshold. There is a certain amount of damage needed to have a chance at an epic loot or to get into gold medal position. Players joining may not respect the efforts of other attackers and kill the monster single-handedly, hogging all the health and depriving others of a chance to obtain epic loot or get a gold medal. Be prepared for a "free-for-all" kill if you decide to make it public.

Links can be found and posted on the Castle Age Wiki:Call To Arms page.

The Arena is a seasonal tournament that is held in Castle Age: Heart of Darkness. The arena provides an added feel of competition between players in PvP form.

As of February 2012, There has only been one tournament.

Your class for an Arena Battle is determined by the one selected within the Arena Class page at the beginning of the Arena Battle. You CANNOT change the class for the current battle once it has started. However you can change your class and have it take effect on the next Arena Battle. Also remember to set your Class Ability from the Battle Class Page.

In this page, players engage other players in a one-on-one duel to see who is stronger. The winner of the duel can gain experience, gold and battle points. The loser may have gold deducted (if it has not been stashed in the treasury) and battle points. Both players lose health per attack. The winner will lose 1-6 health while the loser will lose 6-12. A player whose health is below 10 is not allowed to engage in a duel.

Battle Rank is a ranking system based on the number of Battle Points accumulated through PvP battle.

There are currently 15 different battle ranks, and the 15 ranks are divided into 5 different tiers.

This page allows you to change the color palette of your characters hair and clothing. You can also change your character's gender in this page.

Guilds are a way for people to band together and create a sense of community within the Castle Age world. Guilds allow individuals to coordinate with each other on battles and monster battles.

Guild communications, such as monster CTA's can be found here.

Shows a list of all guild members.
Option to leave your current guild can be found at the bottom.

Shows a list of all guilds in Heart of Darkness.

Guild Class is for Guild Battles and the Arena. It allows you to select one of four classes:

Skill tree is where you buy skills for guild battles in exchange for Guild Points. Guild Points are obtained by fighting in guild battles. Some skills are unlocked by purchasing other skills.

Battle your guild is currently involved in will appear here.

Chests contain special items you can buy with favor points. Each Treasure Chest contains equipment, magic, soldiers and that are exclusive and can only be found in the chests. When pulling from a chest, you do not get to choose the item that you get. You can either get 1 randomly selected item, or 3 randomly selected items (depending on how many favor points you are willing to spend). However, Heroes are unique, and if you pull one that you already had, you are refunded some favor points. The amount of favor points that you receive is the same amount as it would cost to pull 1 item from that chest.

There is currently only one chest available:

The Oracle page is where players can use Favor Points and redeem various perks like refills and buying special FP-only gear. They can also buy FP with real money in this page.

The Demi Gods grant blessings to the faithful. These deities offer permanent stat point increases, depending on what the demi god specializes in, to players who choose to pray to them. They also give demi points on their own alignment. Special items are also awarded to those who have accumulated a certain number of their demi points.

For now the demi point limit is set at 2300, you can get more from attacks but if you pray for ure demi it will reset back to 2300.

Gain stat bonuses simply by inviting other players to join your army. The stat increases are permanent once you have fulfilled the condition for the bonus.