"The Greatest Warriors in all the Kingdoms have arrived at the first Castle Age Festival! Battle other guilds, defeat monsters, and test your might!"

Festival is a link on the Quests menu that leads to several events:

Battlegrounds has two sections. Festival Guild Battle is an event where guilds go head to head under Arena Season 3 format. In Duel Champion, players test their PvP prowess by battling other players via Duel. See more...

Feats of Strength is an event under the Castle Age Festival where players pit their various stats against the generals, monsters, quest areas and missions of Castle Age. See more...

Celesta`s quests: Quests about the heroes of CA. These quests look a lot like epic quests from the lands of mist and water, there is an inventory to store quest items and there is also alignment: good, evil or neutral. Rewards are available depending on total alignment points and path choice during the quest. 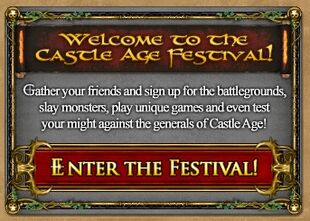 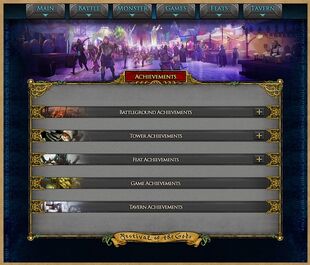 Add a photo to this gallery
Retrieved from "https://castleage.fandom.com/wiki/Castle_Age_Festival?oldid=70054"
Community content is available under CC-BY-SA unless otherwise noted.