Catalyst is the 2nd area available for questing in Castle Age: Heart of Darkness.

Main Quest 1: Travel in the Dark[]

Exhausted from your journey and wary of traveling in the day, you wait for nightfallbefore setting out into the woods, toward the Hunter Base.

Main Quest 2: Children of the Night[]

You notice that you are quickly regaining your strenght. The night is quiet and you notice that your senses are more perceptive that were before. Strange shadows lurk all around you that look almost human...

You make your way out of a thick growth of trees, and begin to hear the waves from a large body of water. A few minutes later, you exit the woods and find that you are staring into a vast expanse of Ocean.

You are taken back by the intensily in which the water pounds the rocks on the nearby beach. The water shimmers against the night sky, switching between varying shades of black and white reflections. The water and looks sharp, almost crystalline, as if the faintest touch could cut into the skin.

As you make your way in town, you notice that the inhabitants here draw a stark contrast from those in the village you recently visited. They eye you suspiciously, almost defiantly, and they move both grace and intensity, as if their movements have been honed with strong purpose. 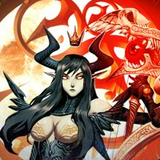 A tavern at the edge of town by the water is exactly as Azeron described it, and you easily make it out for the hunter base. You take a deep breath as you enter into the next stage of your journey

As you enter the tavern, the room quiets and all eyes turn to you. You do not see an unarmed man in sight. "We've been told of your coming," says an older man in the far corner of the room.


He has three long scars on one side of his face running down in the same direction as if from a large claw mark. "I'm told that you are no ordinary traveller... and that you hold inside you the key to victory."


He sees from the expression on your face that Azeron has not fully explained the current situation to you.


Long ago, Azeron defeated Angelus, the Vampire King, and banished him from this world. To prevent Angelus' return, Azeron sealed away some of Angelus' power in the form of three precious artifacts.


Although severely weakened, the vampire remnants have recently learned of these artifacs and the key to Angelus' banishment. Our sources tell us that their forces have been gathering together in recent weeks. We believe they are forming an army, and preparing for war...


In the past, we've been able to keep the vampire forces at bay, but we've sustained heavy casualties in recent battles, and we will not be able to hold them off for long..."


As if on the cue the tavern door bursts open and the closest hunters to the door are quickly dispatched by beings that, although seeming human, move with unnatural grace and strength. A fierce battle ensues, and in the midsth of battle, a sultry female figure enters the room through the shattered doorway.