Chaos Campaign is a feature available at level 100 which allows you to create Chaos Gems and get Summoning Orbs for Phantoms.

Each Campaign consists in 9 tasks (including 3 Monster tasks) which you have two weeks to complete.

There are 3 Campaign difficulties, rewarding different rarities of Gems. Fully completing a Campaign rewards a Gem, while only completing certain tasks will reward Shards upon starting the next Campaign.

Chaos Gems can be extremely powerful and can have a variety of Powers useful in all aspects of the game (PvP, Monster Hunting, Guild Battles). Notably they can provide huge amounts of Piercing or Resistance which is essential for PvP strength.
You can change the values of these powers thanks to the Refine feature.

Chaos gems: What are they?

Chaos gems are gems that can be forged into equipment slots at your Forge. Each has an Elemental power (piercing or resistance), and two random powers (see last section). Besides powers, each gem has several attributes:

Rarity: affects the quality of the bonus to each power

Elemental power: affects the type of the gem. 1 at random of the following:

How to get them

Chaos Gems can be obtained these ways:

Tasks to be done at each level

Tasks you will be asked to complete in each campaign consist of six tasks in top row, three monster tasks in bottom row.

You will be given 3 random types of monster and a certain amount of each. Deal at least the specified amount of damage to each of them.

(% of damage related to the monster total life)

Here is a spreadsheet indicating the damage required for each Monster: Campaigns 5% 10% 15%

will appear on the left of your name (in the list of attackers).

A Chaos Gem will only be awarded upon completion of all the tasks given to the player per campaign. However, if the player fails to complete all the tasks in the campaign, gem shards will be earned for each task successfully finished. Shard quality is awarded based on the difficulty of the campaign (i.e. a common campaign awards common quality shards) and can be saved up and used to alchemize a gem of the same quality as the shards used at a rate of 1000 shards per gem.

Shards are awarded upon completion of the respective task as follows:

Shards are not awarded immediately upon the timer expiring on a failed campaign. The player has to start another campaign before receiving the shards awarded from the previous one.

Each Chaos Gem will have 1 random power among the following

Click on the min–max range to show full four colored rows that list range by quality as can be seen in Refine.

All types have same minimum and maximum amounts, defined by gem rarity.

and 2 random powers among the following: 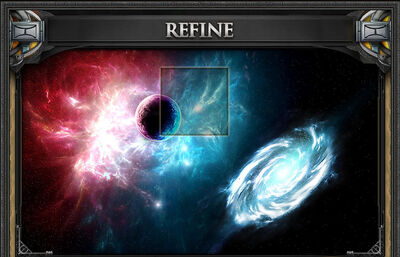 Refining is a mechanism introduced to allow players to reroll the values of the powers of their gems. However the powers themselves cannot be changed, only their values. Be aware that the values can increase but also decrease.

The main way to earn them is attacking the World Monster. They are part of its loot, and can also drop when hitting (bigger stamina amounts yield better chances of earning a Crystal).

They can also be earned occasionally through various Events, such as Meteorite and Treasure Island.

They are also purchasable since Nov. 2018 in the Colosseum Shop for 500 Honor Points.

Refine can be found in game by clicking "Refine" (Facebook - web3) in the Keep tab.

Refining costs 1 Refine Crystal if you choose to reroll all 3 values at once. However you may want to reroll only 2 or even 1 value, if you're satisfied with the values of the other powers.

In this case, you can lock the values you want to remain unchanged by clicking on the padlock icon(s) on the left of the power description.

Upon clicking the "Refine" button, unlocked power values are rerolled. They can decrease or increase.

After selecting a gem to refine, its powers are listed below it.

They are color-coded depending on their value:

Check the Powers section for the detailed possible values of each power.

Depending on the Chaos Campaign you start, you will have access to different Chaos Summon rewards:

Note:
Chaos Summon points don't reset upon starting a new Chaos Campaign. This means you can for instance earn 600 points by completing a Hard Campaign's tasks, then start a Special Campaign and use your points then.

In October 2016, Phantoms were added to the game:

These new monsters each require an Orb to be summoned.

These Orbs are obtained through Chaos Campaigns. For each Campaign task you complete, you will earn a certain number of points (at the moment of completion, not when you finish your current Campaign).
Depending on the amount of points you gathered before clicking the "Summon" button, you will have different chances of getting each Orb (or failing and getting no Orb).

Note: Clicking the "Summon" button won't directly summon the monster, it will give you an Orb, which you can then use at your convenience any time later.

Hovering over the "Chaos Summon" part of the Chaos Campaign will give you this information:

So depending on which Orb you want, you shouldn't necessarily wait to have enough points to have the best odds before clicking the "Summon" button.

After clicking and no matter what you got, your points will be reset to 0.

Earning points works the same way as earning Shards (quantity-wise):
The amount you earn for completing a task depends on the Campaign difficulty and the type of task.

Completing the Campaign also gives extra points: 300 for a Hard Campaign, ??? for Normal, ??? for Easy.

So if you complete a Hard Campaign, you will earn a total of 1040 points:

Note: You can see how many Orbs you currently own in your Keep, under the "Alchemy Ingredients" section.

Among other things, you can alchemize an Unbind Stone using drops from Phantoms. You can use 1 Unbind Stone to prevent the loss of a Chaos Gem when salvaging an item.

The Special Chaos Campaign and Draculia, The Blood Dominator were introduced in November 2020.

You need a Draculia Orb to summon Draculia, and 10 Blood Contracts to avoid a 5% damage reduction when hitting him. You can get these two items through Chaos Summon after starting a Special Campaign.

Earning points towards Chaos Summon during Special Campaign works exactly the same as during a Hard Campaign (same amounts for the same tasks).

Hovering over the "Chaos Summon" part of the Special Campaign will give you this information:

Main article: Strategy Guides/Making the most of Chaos Campaigns