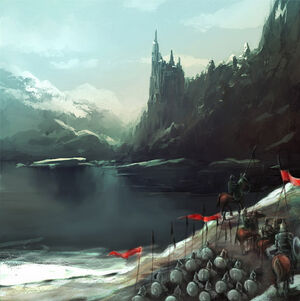 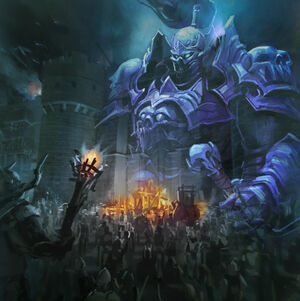 The Deathrune Siege was the first Raid to be introduced to Castle Age. You must use a Drake Helm to start it. Keep in mind that you need to summon it through alchemy, as summoning link through raid currently doesn't work.

Up to 100 people total may participate in the battle for the advanced Campaign and up to 75 people for the easy Campaign.

Each Raid has 2 phases, in which you must defeat a number of enemy soldiers (see below). You can participate in two battle modes: Invade or Duel, each costing 1 stamina. Depending on your timing, you can earn 1 or 2 kills every time you fight. See Notes for more details. There are also two other modes, Invade x5 and Duel x5, that show up when you reach 30 stamina. These work the same way as the regular Invade and Duel options, except that it costs 5 stamina and you can earn either 5 or 6 kills for every fight.

You can participate in up to 6 raid at one time (including your own).

The siege is harder than it might first appear because it only ends when a certain number of kills is reached. Siege weapons can account for only 1800 of the 11500 kills required for the Advanced Siege; the rest of the kills need to be made via 'normal' attacks. Each point of stamina spent on normal attacks can get you at most 2 kills; meaning it takes a total of at least (4850+75+100)=5025 stamina to beat the two stages of the advanced difficulty siege. This, coupled with the chance that you might be pitted against an opponent you can't beat, causes the Deathrune Siege to take a significant amount of time/stamina.

It is recommended to only Invade or Duel (instead of Invading x5 or Dueling x5). If you wait about 20 seconds for the battle list to change without refreshing on a page, you have the ability to get a +1 kill, making it so you get 2 kills on that attack.

There are currently two levels of this battle, and therefore two known sets of possible drop rewards

Retrieved from "https://castleage.fandom.com/wiki/Deathrune_Siege?oldid=74770"
Community content is available under CC-BY-SA unless otherwise noted.