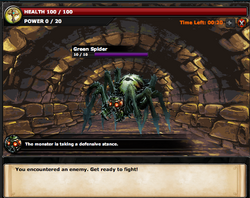 The Dungeon was an alternative form of questing, requiring more player interaction and containing more graphics animated with HTML and javascript. It is partially dependent on attack and defense, in that higher attack/defense will generally increase the player's damage done and decrease the amount of damage taken. Rewards for clearing a level of the dungeon include experience points, Essences, Guild Coins, Hero Powders, and Skill Points.

To progress through the dungeon, the player must defeat several monsters, navigate through the dungeon (in the future), and defeat the level's boss. Along the way, there may be other elements like treasure boxes to loot, artifacts to investigate, rooms to heal the player, and more possible features.

The player has several different types of attacks to choose from when traversing the dungeon.

When the player fills their power gauge with 20 points, they unlock a class attack. This attack does more damage than a normal attack, and does damage independent of the opponent's attack type.

For the non-boss monsters, the monster's action/status gives away which attack should be used.

Retrieved from "https://castleage.fandom.com/wiki/Dungeon?oldid=82573"
Community content is available under CC-BY-SA unless otherwise noted.