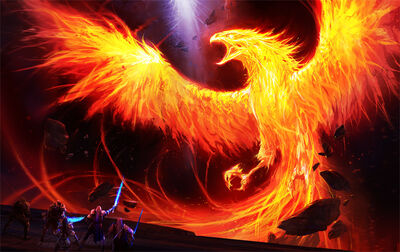 Fenix, Risen From Ashes can be summoned on the Alchemy Summons page if you have the Orb of Fenix, which comes from the Land of Fire (III)'s Special Mission:The Great Phoenix

You have 168 hours to defeat Fenix before he flees.

Fenix has three different areas that can be attacked, each with its own health and resistance:

Damage reduction from Talons and Fire Shield is applied *after* piercing damage is taken off.

Fenix has Piercing and Fire Resistance.

While fighting Fenix, there are 5 siege weapons that can be launched to deal extra damage.
All Siege Weapons hit Fenix's Head and are unaffected by blocks and resistances.
*Fenix's Head has 450,000,000 HP 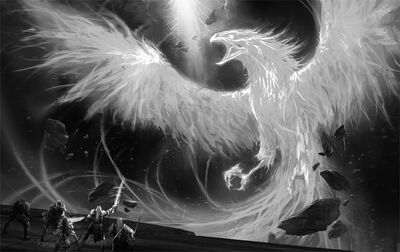 Retrieved from "https://castleage.fandom.com/wiki/Fenix,_Risen_From_Ashes?oldid=80284"
Community content is available under CC-BY-SA unless otherwise noted.