This article is about the monster. For the soldier, see Genesis, The Earth Elemental (soldier) 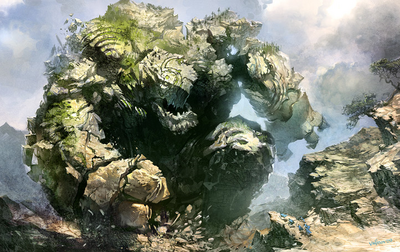 Genesis, the Earth Elemental can be summoned on the Alchemy Summons page if you have an Earth Orb and are at least level 80. You have 168 hours to complete the battle before it flees.

Participants: up to 130 people total, with the following distribution:

When you attack Genesis, it will attack back. Below Genesis's life bar is another bar that shows Illvasa, Plateau City's Defense. The closer it is to 100% full, the more damage your attacks will deal (when it is empty you cannot attack Genesis). You can replenish the bar by clicking the Fortify button. The amount of defense added back to your city is based on your defense stat.
On summoning the length of the City Defense bar will be 33% of the maximum possible, but 50% of the length of the bar will be grayed out. The defense bar extends by 1% of the maximum with each new attacker who joins, so 50 attackers are needed in order to have full City Defense. As players join the battle, the maximum amount of the Castle Defense will increase.

While fighting Genesis, there are 5 siege weapons that can be launched to deal extra damage.
All Siege Weapons hit Genesis and are unaffected by blocks and resistances.
*Genesis has 100,000,000 HP 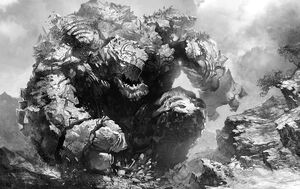 Genesis loot thresholds where modified with the introduction of Vitality Vines and there are not enough records to provide accurate numbers so handle the following info with care. Loot thresholds for 99%:

Retrieved from "https://castleage.fandom.com/wiki/Genesis,_the_Earth_Elemental?oldid=80906"
Community content is available under CC-BY-SA unless otherwise noted.