This article is about the monster. For the hero, see Orc King 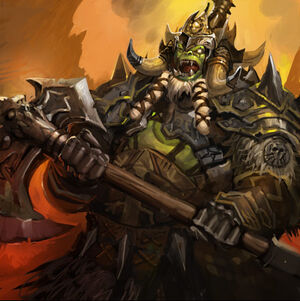 Gildamesh, the Orc King can be summoned on the Alchemy Summons page if you have an Orb of Gildamesh, which comes from the special mission in the Land of Fire, Heart of Fire and are at least level 8.

You have 72 hours to complete the battle before he escapes.

Participants: up to 10 people total

Before the Quest: Heart of Fire

With the Crystal of Fire in his grasp, his thunderous voice roars, and the mountains tremble. He is fury. He is rage. He is the Orc King.

Defeat him and his hordes to retrieve the crystal!

As the battle rages and your armies collide in the midst of a huge storm, Celesta comes face to face with the Orc King...

Celesta: I have finally found you! Return the crystal or you will suffer the divine punishment of the gods!

Orc King: Foolish Child! You will suffer the pain of a thousand souls!

Dragan: The orcs have not set foot in the Land of Fire for over 50 years. What is your purpose?

Orc King: It does not matter! My master's plan has been set forth. This is greater than you and I know.

The Orc King Charges forward with his axe raised above his head. As their distance closes, there is a bright flash! The sky itself seems to scream. Bolts of lightning shoot from Celesta's fingertips, and the Orc King falls to his knees. The Orc King curses you as he and his remaining army retreat into the storm. When the battle clears, you find a familiar red stone on the ground.

You can now chase the Orc King and engage him in an Epic Boss battle! You can create his epic fight by summoning him from the Alchemy Page.

You have summoned the Gildamesh, The Orc King, now request for assistance with this battle with a call to arms! 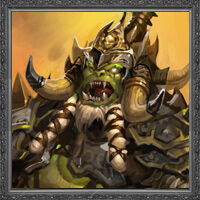 Gildamesh sweeps his axe in large arcs as he rushes at you and Celesta. Celesta dodges his blows but suddenly falls backward as she trips on the jagged rocks below you. The Orc King grins. Your party is busy fighting his minions. You know this has to end soon. With blinding speed, the Orc King raises his axe and rushes at you again.

You dodge swing after swing until you are cornered. The Orc King raises his axe and brings it down. Suddenly you see (Friend/Strider) rush up from the side and deflect his blow. (Another Friend/Dragan) comes up from behind and bashes his shield on the Orc King. Your friends have defeated his minions! You take the opportunity to attack!

You stun Gildamesh with the blunt side of your weapon and with a quick motion, you bring your weapon down a second time, piercing his armor.

A burst of intense light blinds you and suddenly, the Orc King is gone.

You have defeated the Orc King and already claimed the Crystal of Fire. Now it is time to journey to the Land of Earth and search for the Crystal of Earth. 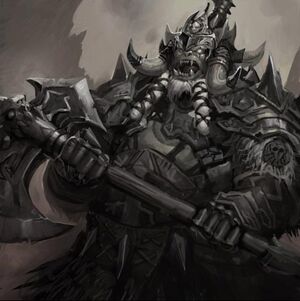 Old loot thresholds (not quite useful) were listed as:

Retrieved from "https://castleage.fandom.com/wiki/Gildamesh,_the_Orc_King?oldid=86733"
Community content is available under CC-BY-SA unless otherwise noted.