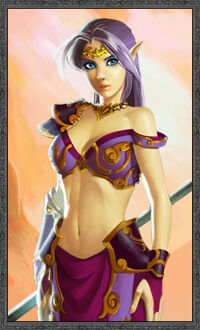 All heroes need to be "recruited", i.e., acquired. There are five ways to do this, which varies based on the specific hero:

An A-Z photo gallery of all heroes is at Heroes Gallery.

While you may recruit many heroes, only one may be your "Active General" at a time. Your Active General contributes their Attack, Defense, and any special abilities when attacking (also dispelling and fortifying) a monster, invading another players army, or questing.

There are several ways to switch Active Generals:

Each general has different Attack and Defense stats which helps determine your battle power in duels. And they each add their own special ability, which has one of a variety of effects on gameplay.

Your Active General had formerly determined whether or not you will gain influence while doing quests, but this was changed in September 2014 so that any general can give influence on any quest.

As time goes on, each general can become stronger. If you have them selected as your Active General, they will gain experience whenever you do quests, participate in PvP, and when you fight monsters (Note: you will earn experience as well from these activities, but the amount you earn will be different than the amount your active general earns). Weaker generals earn experience faster than stronger generals. You can start leveling your generals once you reach level 10.

When a general gains a level, his/her/its attack and defense will increase, and their special ability improves. Every general begins at level 1, and eventually reaches level 4. Then, at first, obtaining Hero Medals allowed a few specific generals to have their level cap raised a bit. With the introduction of Hero Crystals, the level cap has been raised for all heroes. As a hero levels up further, they will gain more attack and defense, and selected generals will see an increase in abilities, or even secondary abilities.
Note: Heroes purchased with gold will retain their level and experience if you sell them and then hire them back at a later time to avoid upkeep costs.

To level up, you must reach a certain amount of General Experience and use up a Hero Crystal. At level 20 and every 5 levels above that, you will need a certain amount of Blue, Red, or Green Evolution Crystals as documented here: http://castleage.wikia.com/wiki/Hero_Crystal#General_Leveling

This is a spreadsheet that lists all the heroes and their stats and abilites from level 4 up: General Level 5 Upwards Upgrades

And this spreadsheet gives the required XP to reach any level for all generals (by categorizing them in 12 different "XP tiers"): Castle Age: General leveling and XP

When a player owns multiple copies of a general (or one or more Promotion Orbs), they are able to Promote the general to a higher rank, signified by an increasing number of stars. Promoting generals grants them a boost in stats, as well as a boost in ability level if their ability has power upgrades. For example, a 2* general at level 4 would have the same ability as a 1* general at level 7. The boosts are displayed in the table below.

Favor generals (bought from the Oracle general shop) are capped at 5 stars*, while generals pulled from chests are capped at 8 stars. Other generals generally aren't freely available to purchase, and don't have a standard cap.

*You can only buy 12 copies of a Favor General through the Oracle "general shop", however since the introduction of Oracle Generals Pack promotions in 2017 and then the Mystic Emporium in 2018, Favor Generals are no longer capped to 5 stars. If you manage to get enough copies, you can promote them all the way to 8 stars.

*Note: Ability ranks past 5 are projected, and need verification.

There are a few Heroes whose abilities don't follow the usual ability boost when promoted:

The boost their ability gets when promoted is much bigger than it should be.

The Promotion Orb is a material used for general promotion. When promoting a general, one Orb can replace one copy of a general.
For instance, if you have a general already promoted to 4*, you need 5 more copies of this general to promote him to 5*. However, if you have 1 Orb, you can use it to replace a copy, so when promoting your general it will use the Orb in addition to the 4 general copies.

Each general is classified as one of three types: Balanced, Defensive, or Aggressive. These types affect the materials necessary to upgrade generals at certain levels past level 20, with the hero's type determining the color of evolution that is predominantly needed.

There are a lot of generals. Each general has its own stats. They also have an ability. They can also level up and change their stats and the strength of their abilities. Because of this, there is a bit of a disagreement on how to display this information. If you wish, you can browse our General General Tables (which carries general information on the generals). If you wish to know absolutely everything about a General, please browse that general's individual page. (Note: if you are wondering what happened to all the information that used to be on this page, it has been moved to the General General Page)

As of January 1, 2014, there are a total of 210 heroes, 8 of which can no longer be obtained (Nax the Blighted, Odin, Eternal Alystra, Kilgore, Dexter the Drunk, Memnon, Angelica, Elin, Noktar, Persephone and Gabrielle).