This article is about the monster. For the hero, see Karn the Minotaur 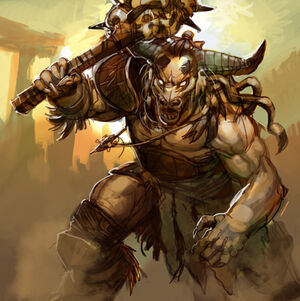 Karn, The Minotaur is a Quest Mini-Boss found in the Land of Earth. You can only summon him once. He will appear on the map once you have Level 1 100% Influence on the The Forbidden Forest main quest. You will also need at least 20 Army members or pay 30 Favor Points to unlock the battle.

You have 120 hours to complete the battle before Karn flees.

The path to the ruins is blocked by a collapsed column. It looks like you will need some help clearing a path if you are to stop the minotaur that has been terrorizing passing travelers.

The path to the ruins is clear! Now you will put an end to the minotaurs reign of terror and the townspeople will have nothing to fear. Prepare for your greatest challenge yet.

The massive minotaur Karn has proven to be one of your most fearsome adversaries thus far. His strength is great and he is surprisingly nimble while wielding that massive spiked mace. If you are to defeat him, you will need to do it with your wits since there is no way that you can match his might. You notice the cliff wall against your back is made up mostly of granite... The idea strikes you immediately.

You: You stupid bull. You are nothing but a coward terrorizing people.

Karn starts to stomp his foot and it looks like he is readying to charge. He lowers his head and points those sharp bull horns in your direction. In an instant he starts his charge. Your breath slows and your vision becomes focused. You must time this exactly. Too early and Karn will be see through your plan. Too late and you will end up impaled at the end of those horns. Just a little bit closer, a little closer... You lunge towards your right and Karn misses you. His momentum carries him towards the granite cliff wall and causes him to crash violently against it. Karn is dazed and it seems his horns are stuck in the cliff wall. You quickly grab your weapon and stab Karn through the back. The great minotaur roars in pain and in slumps to the ground. The great minotaur is dead. His reign of terror has ended!

Rewards on Every Attack

When using regular attacks against Karn, you will earn:

When using power attacks against Karn, you will earn: 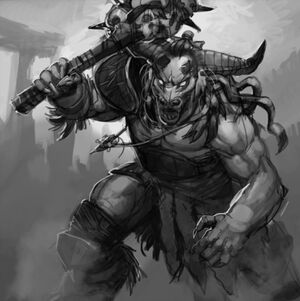 Note: There are two Iron Axes appearing in the loot list. It is unknown if this affects their drop rate.

Retrieved from "https://castleage.fandom.com/wiki/Karn,_the_Minotaur?oldid=52048"
Community content is available under CC-BY-SA unless otherwise noted.