This article is about the monster. For the hero, see Keira, the Dread Knight (hero) 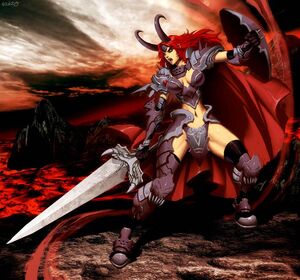 Keira, The Dread Knight was the second monster ever made available to fight. She can be summoned on the Alchemy Summons page if you have an Orb of Keira which comes from the special mission in the Demon Realm, The Rift.

You have 72 hours to complete the battle before she escapes.

Participants: up to 10 people total.

Before the Quest: The Rift

You must reach the rift now and close it before it's too late! You rush towards the portal, taking down demon after demon. Just as you are twenty yards from the portal, you are stopped by an imposing figure. "I don't know who you are but prepare for your end."

Keira: What are you mortals doing here? Why are you foolishly attempting to stop Lord Mephistopheles?

Before you have a chance to utter a reply, she springs forward with surprising quickness and waves her large sword as if it were a feather. You are barely able to raise your weapon to parry the blow but you are knocked back. Her strength is that of no mere mortal and her speed is blinding. She lunges forth again and you are pushed back, moving closer and closer to the cliffs overhanging the flowing rivers of lava.

Celesta: We must push her back! Buy me some time!

You do your best to comply but it's definitely easier said than done. Although you are able to parry and deflect her attacks, each hit numbs your hands as if you were being pounded by a large war hammer. She deflects your attacks with ease with her massive shield. Your arms and legs feel like stone and know that if this keeps up, you will be done for.

Keira: Give up mortal. You are no match for someone with my vast power. I could have easily ended this battle the moment it started but it's been ages since I've been able to toy with a mortal.

You know her words are true and the battle will end in the next moments at this pace. Keira's lunges forth and jumps in the air with her enormous blade raised over her head. She brings the sword down with such force that your already numb hands can no longer grip the blade and you are forced to your knees.

Keira: This is the end!

You close your eyes and wait for the inevitable. You see a bright flash of light through your eyelids and you hear a scream.

You quickly open your eyes and see Keira holding her side. It must have been Celesta. Keira begins to chant words from an incomprehensible foreign tongue.

Your lungs tighten and you feel a sharp pain in your ears. You try to focus your eyes but everything starts to blur. As you fall to your side and your eyes start to lose focus, you see Keira enter through the rift. And the rest goes to black.

You have located Keira, now is the time of Reckoning! Attack Keira the Dread Knight now!

You have summoned the Keira the Dread Knight, now request for assistance with this battle with a call to arms!

You see Keira fiercely fending off the attacks of your fellow army members. The group has put together a valiant offensive effort and she is on the verge of defeat. You grip your weapon tightly and wipe the sweat from your brow. This HAS to be the deciding blow.

You gather strength in your tired body and rise to your feet. Keira is busily evading a volley of fire arrows. As she hops back, you see your opening! You rush forth from the right. She sees you but it's too late. She tries to bring her blade down on your head but her wounds have made her slow. You narrowly sidestep her strike and plunge your blade through the jewel on her chest plate. Have you done it?

Keira: NOOOOOOOOOOOOOOO! How can you mere mortals defeat me? I am one of the Guardians of Mephistopheles!

A burst of intense light radiates from Keira's body. In an instant she disappears and there's nothing left of her except her armor and a cloud of sulphur.

You have done it. You have defeated her. You should be happy but you are so exhausted that you can barely think. Who was this Keira? How is she connected to Mephistopheles? You came to the Demon Realm to find Mephistopheles but you haven't found any answers.

From here, where do you go? 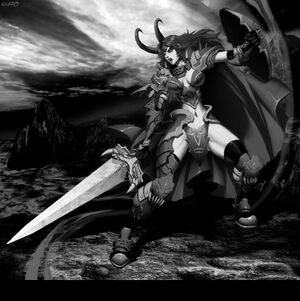 Odds of Getting each Epic:

Retrieved from "https://castleage.fandom.com/wiki/Keira,_the_Dread_Knight?oldid=86737"
Community content is available under CC-BY-SA unless otherwise noted.