This article is about the quest land. For the conquest area, see Guild Conquest/Land of Earth.

The Land of Earth is the second area available for questing in Castle Age. To unlock the Land of Earth, you must gain 100% influence in the first 4 Land of Fire quests (Pursuing Orcs, The Stone Lake, River of Light, and Falls of Jiraya). While doing the quests, there is a chance that you will be ambushed by some enemies. If you defeat these foes, you will either earn double the amount of influence you normally would have earned, or you will win a Random Soldier Drop from the fight.

Karn, the Minotaur is a new addition to this questing hub as a mini boss like Kull. He appears after clearing the second quest (Crossing the Chasm), and can be summoned once the player has at least 20 army members, or if the player pays 30 Favor Points to summon him.

Main Quest 1: The Stairs of Terra

A giant chasm lies between you and the path. There seems to be no other way but going underneath. There have been stories of legions of undead hiding in these chasms.

Go to the Epic Quest Kingdom of Earth page to see it. 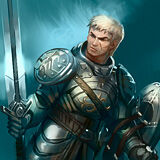 To recruit Valiant, ask 25 friends to "speak to him on your behalf" by sending them a request similar to gifting. Once 25 friends have accepted the request, visit Valiant again to get him to join you.

Alternatively, you can just pay 25 favor points to sway him.

Retrieved from "https://castleage.fandom.com/wiki/Land_of_Earth?oldid=66642"
Community content is available under CC-BY-SA unless otherwise noted.