The Land of Fire is the first area available for questing in Castle Age. At first, only the 5 Main Quests are available. Once you gain 100% influence in 4 out of the 5 Main Quests, the Special Mission becomes available. After doing the Special Mission once, all Sub-Quests are unlocked for all quests that have reached 100% influence. While doing the quests, there is a chance that you will be ambushed by some enemies. If you defeat these foes, you will either earn double the amount of influence you normally would have earned, or you will win a Random Soldier Drop from the fight.

This may not be available to new players of the Facebook version of the game, since the Land of Fire quests have changed. The sequence below was taken from the MySpace version in early June 2010.

The following quests changed around May 28, 2010, but if you did the old versions you don't need to redo these. See Land of Fire/Old Main Quest 1 for the old versions. The MySpace version changed to match the Facebook version around June 13, 2010.

Sub-Quest 1: Sneak up on Orcs

Once 'River of Light' quest is 100% completed for the first time, a battle with Kull: Orc Captain is unlocked. Even though it appears on the quest map, it's not an actual quest but a monster boss battle (usually the first battle for a player).

NOTE: This probably isn't a quest, but the Emerald Dragon just shows up in your Monsters list when you reach level 10.

Go to the Epic Quest City of Jiraya page to see it. 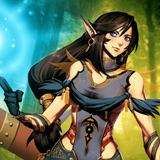 To recruit Sephora, ask 25 friends ( Or 5 if you are below lvl 30) to "speak to her on your behalf" by sending them a request similar to gifting. Once 25 friends accepted the request, visit Sephora again to get her to join you.

Alternatively, you can just pay 25 favor points to sway her.

Retrieved from "https://castleage.fandom.com/wiki/Land_of_Fire?oldid=69404"
Community content is available under CC-BY-SA unless otherwise noted.