This article is about the quest land. For the conquest area, see Guild Conquest/Land of Mist.

The Land of Mist is the third area available for questing in Castle Age. To unlock the Land of Mist, you must reach 100% Influence in the first 3 Land of Earth Quests (The Stairs of Terra, Crossing the Chasm, and The Forbidden Forest). While doing the quests, there is a chance that you will be ambushed by some enemies. If you defeat these foes, you will either earn double the amount of influence you normally would have earned, or you will win a Soldier from the fight. The Land of Mist's Soldier drop: Shadow Warrior. Random Soldier drops from sub—quests: Orc Grunt and Valerian Mystics.

Main Quest 2: The Keep of Corelan

Main Quest 5: The Cave of Wonder

Go to the Epic Quest Kingdom of Mist page to see it.

This Excavation Quest is a special quest that is time based and does not offer skill points. Instead the questor has 120 hours to complete levels, earning Defense Essences can be useful in forging. The maximum level is 4 although players are allowed to collect if they have completed at least 1 level of the quest. The higher the level of the quest, the greater the chances to get more Defense Essences but also increases the energy required to level it further.

Warning: After collection on any level, the timer and quest progress are reset and you start over at level 0, so don't collect until feel you are done. There is no advantage to partially completing a level; if you feel you cannot complete your current level before the timer runs out, you're better off simply collecting immediately.

Special Mission: Eye of the Storm 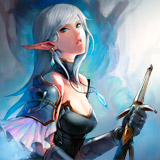 To recruit Arielle, rescue 10 princesses in this land's Epic Quest. Arielle will automatically join once you have fulfilled the requirement and collected your reward.

Retrieved from "https://castleage.fandom.com/wiki/Land_of_Mist?oldid=76211"
Community content is available under CC-BY-SA unless otherwise noted.