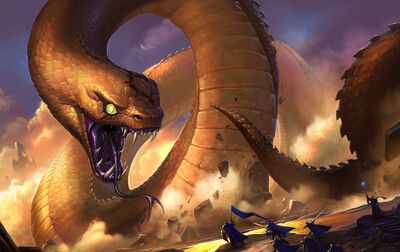 This is a feature of Land of Mist following the defeat of monsters resulting from a HARD Explore. Once the land has been cleared of its defending monsters, there is a normal 24h collect period. At the end of the 24h, the land will either convert to the normal 48h protected mode OR generate the legendary mine monster Ouroboros

Participants: only guild members may participate in the battle, with the following distribution:

This battle uses the Monster Stance and Piercing/Resistance systems.

You can see your stance in the "General Alliance" tab; it is your main general's level + the levels of its allied generals that share his/her type (aggresive, balanced or defensive).

B) Your stance is lower than the monster's stance:
- You don't get Contribution Points.
- You don't fill any of the bars above (Damage, Critical, Decay)
Ouroboros' stance difficulty rating is 30.

Critical boost for Levels 2-MAX not verified.
Decay starts at -5.0 per second, and decreases with successful attacks with a balanced general.

While fighting Ouroboros, there are 5 siege weapons that can be launched to deal extra damage.
All Siege Weapons hit Ouroboros and are unaffected by blocks and resistances.
*Ouroboros has 2,500,000,000 HP

None of this monster's items or alchemies are in the Item Archives.

Retrieved from "https://castleage.fandom.com/wiki/Land_of_Mist_Legendary_Mine:_Ouroboros?oldid=85769"
Community content is available under CC-BY-SA unless otherwise noted.