This article is about the monster. For the hero, see Aurelius (hero). 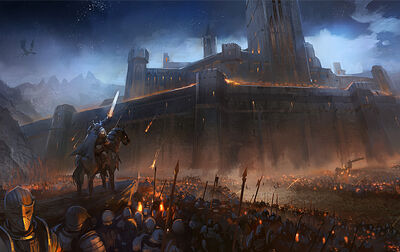 Lion's Rebellion or Aurelius, Lion's Rebellion (as seen in the game's monster list page) can be summoned on the Alchemy Summons page if you have the Orb of Aurelius, which comes from the Earth II's Special Mission: The Rebel Leader

Participants: Up to 135 people total, with the following distribution:

This battle uses the Monster Class System. The Tactics command introduced in War of the Red Plains is available in this battle.

This is the second battle that offers a general third option for fighting against "Monster". As well as Attack and Fortify, you can use Tactics against it. It uses stamina, and the stamina use is the same as if you are doing a regular attack. Unlike a regular attack, using Tactics will have you attack with your War Council. For every member in your War Council, if they win their individual fight, you will do +X% more damage in your attack. X is different for each individual War Council Spot. You must be at least level 50 to unlock the Tactics command.

From left to right, if you/your General wins their individual fight, you will deal X% bonus damage above and beyond a minimum baseline amount. If a high enough % of bonus damage is achieved, the total output will exceed that which can be dealt through a standard Power Attack:

Please note, while you shouldn't have a problem winning the Tactics version of a War fight, if you are struggling with it, be mindful on the order in which you place your strongest Generals. The optimal placement, to guarantee the best chance of getting the most bonus damage, is different than the system that determines whether or not you win the war. If you need to switch around your War Council for this Monster fight, be sure to switch it back to defend yourself in War battles. You can still deal damage even if you lose all slots using Tactics. However, your damage output will be decreased severely. 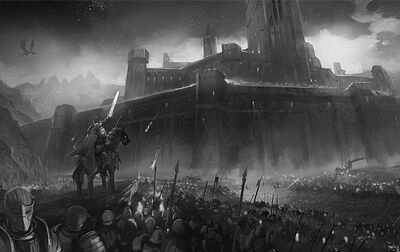 Retrieved from "https://castleage.fandom.com/wiki/Lion%27s_Rebellion?oldid=85763"
Community content is available under CC-BY-SA unless otherwise noted.