This article is about the monster. For the hero, see Lotus Ravenmoore (hero) 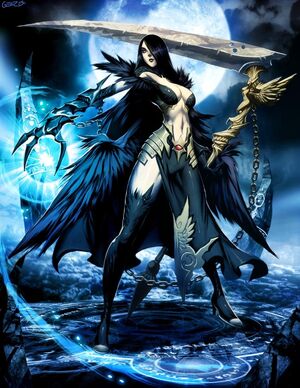 Lotus Ravenmoore is the sixth monster made available to fight. She can be summoned on the Alchemy Summons page if you have the Lotus Orb which comes from the special mission in the Undead Realm, titled Undead Embrace.

You have 48 hours to complete the battle before she escapes.

Participants: up to 15 people total

Before the Quest: Undead Embrace

You feel a darkness you have only experienced once before; your fight with Mephistopheles! The evil is so great it becomes a struggle to approach the door but this is your chance to face Mephistopheles again! You crash through the door and are confronted with someone you've never seen before.

Lotus: I've been waiting for you young warriors. So you were the ones that defeated Keira? Hmph. That's quite disappointing to hear. I knew Keira was weak but to lose to the likes of you? It brings up the question as to why she ever became one of Mephistopheles's chosen ones. I'm sure her overconfidence and carelessness is what did her in. However, I assure you that I will not fall as easily as her. You'll soon find out that there are worst things than the embrace of Death.

Before you can blink, Lotus has disappeared from your view. A loud snap is the only clue something had happened. In an instant, Lotus reappears to your right and swings her huge scythe at your head. You are barely able to duck below the scythe blade but a few of your army members aren't so lucky. Before you can retaliate, she has disappeared and again it is followed by the loud snapping noise.

You realize what's happening. She's moving so fast that she is displacing the air around her. You stay alert knowing that she will reappear to take another swipe at you. From the rear! You roll to left, again barely avoiding the huge weapon.

Lotus: So I see you do have some skills. But you know you cannot defeat me by simply hoping to avoid my death scythe. Eventually, you will tire and I will bring you over to the side of the undead.

You don't sense any type of arrogance in her words and know that it's true. Avoiding her the first two times was only by coincidence. You must go on the offensive. With a loud snap, Lotus has disappeared again. She attacked from the right the first time and the rear the last time. It's time to take a gamble. You close your eyes and grasp your weapon tightly. The hair on the back of your neck tingles. Now is your chance. You swing your weapon wildly to the left and connect!

Lotus: Aaaahhh. You rodent. That was a lucky strike. However that was barely a scratch. I doubt you'll be able to do that again. If you want answers, find me in the Undead Plane.

With a loud snapping noise, Lotus disappears again. However, the huge evil presence from chamber is gone. You realize that you must find a way to the Undead Plane.

Lotus: I've been waiting for you! 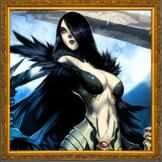 "In the Undead Plane, you are no match for me. My powers are ten-fold here."

Lotus disappears with the snapping sound again. Which direction will she come from? From your previous skirmish you've gained a better sense of her evil energy. From the right! You duck under the slash from the right hand side. Wait! Something doesn't feel right. Another slash from above. Before you can think, you lunge forward to try to avoid another blow.

Burning pain! The scythe opens up a wound in your upper thigh. The pain is almost unbearable and feels as if fire is eating away at you. The cleric quickly murmurs a magical hymn and a soothing light envelops your wound. The pain becomes bearable but it looks like the evil energy from the Scythe is preventing the wound from being completely healed.

Where did that second strike come from? It seems like the Undead Plane has made Lotus even more powerful than your previous encounter.

Lotus: My death scythe, Onslaught, draws its power from the lost souls in the Undead Plane. Any living being caught in its path will feel the agony of the dead spirits.

Lotus prepares for her next attack. You brace yourself for the inevitable attack. Your leg feels weak. Will it be possible to dodge her next attack? If you stay on the defensive, it will surely be the end of you. You devise a quick plan and ask Paladin (Player) to cast Smite on Lotus while you keep her occupied.

Lotus again disappears. Which direction will she come from? You must rely on your instinct. She's coming from above. Rather than dodge the scythe, you quickly spin around and trap the scythe's blade in between your two hands. Lotus's strength is overwhelming!

(Player) casts Smite on Lotus. Lotus recoils in pain. You see your opening and yank Onslaught from Lotus's hands. The scythe is incredibly heavy but you swing it with all your might. The scythe pierces Lotus and she lets out a deathly scream. She dissipates into the air with a brilliant flash of light. When you open your eyes, you're no longer in the Undead Plane.

What do Keira, Lotus and Mephistopheles have to do with one another? 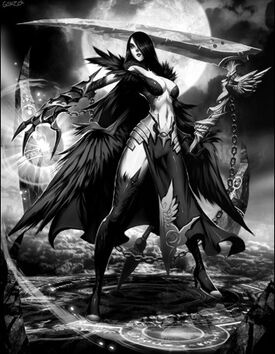 Approximate chances of specific pieces of loot (might be obsolete):

Retrieved from "https://castleage.fandom.com/wiki/Lotus_Ravenmoore?oldid=86745"
Community content is available under CC-BY-SA unless otherwise noted.