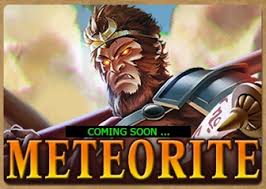 Meteorite is an event which takes place from time to time and usually lasts 7 to 9 days.

You will earn rewards at the end mostly based on your activity in Monsters.

This event is announced with the following instructions:

These are the actions that may drop meteorites:

You won't get meteorites:

When awarded with a meteorite drop, it will be one of the following (randomly):

You can alchemize meteorites into gold meteorites, with this recipe:

You can also perform the following:

Your rank is determined by the amount of

Gold Meteorites you own.
The amount of

Blue Meteorites are used as a tiebreaker.
Once the event ends and the deadline for alchemies is over, you will be awarded with prizes based on:

As the chance of getting a meteorite seems to be linearly related to the amount of stamina or energy spent (this requires verification/testing though), using small or big stamina or energy buttons shouldn't matter much, as in the end, with a large number of clicks, the average number of meteorites earned shouldn't differ much.
Use bigger amounts if you want to be almost certain of getting a drop; smaller amounts if you're feeling lucky or like gambling!

The only thing that really matters is to avoid "overhitting". Because upon reaching high enough amounts of stamina or energy, you reach 100% chance of getting a meteorite (to be verified - but if not 100% it's very close).  So if you go above these amounts in one hit, you're wasting stamina/energy, as overhitting doesn't increase your chance to get a drop on your next hit(s).

Using 200 stamina seems to have 100% chance (or very close) to drop a meteorite. So using 300 stamina or even more in one hit (using Barbarus or Orc King for instance) will waste stamina, as it will also give you only 1 meteorite even if you use 600 or 1000 stamina, while you could have probably gotten 3 or 5 meteorites by doing 3 or 5 x 200 stamina hits (or even more meteorites with smaller hits if you're lucky).

All in all, it seems that a meteorite drop will be guaranteed for a 400 Skill Points use: 200 stamina or 400 energy (however there is basically no way of doing a 400 energy heal).

About duels and invades:
As they use only 1 stamina, the chance to get a meteorite this way is very low.

An event named FLIPPED was introduced to celebrate the 2018 Lunar New Year and Valentine's Day. It was basically a Meteorite event, but Meteorites were named Roses and the main reward was Hera (hero introduced with this event) instead of Monkey King.

An event named Happy Halloween was introduced to celebrate Halloween 2018. It was basically a Meteorite event, but Meteorites were reskinned as candies (Gold Meteorites were Jack-O-Lanterns), and the top reward was Beast Master (hero introduced with this event) instead of Monkey King. The other rewards were exactly the same, exception made for Refine Crystals being replaced by Enhance Crystals on the rank-based prizes for Top 1000 and higher.

Extra info given on the event page:

An event named Happy Easter was introduced to celebrate Easter 2019. It had the exact same rules and rewards as the previous Meteorite event, but Meteorites were reskinned as Eggs (Gold Meteorites being Rainbow Eggs).

An event named St. Patrick's Day was introduced in March 2020. It had the exact same rules and rewards as the previous Meteorite event, but Meteorites were reskinned as Pot of Golds, Green Beers, Leprechauns Hats, and Shamrocks (the latter replacing the Gold Meteorites).

Castle Age 11th Anniversary included an event called Anniversary Celebration which was very similar to Meteorite, using Party Poppers, Colorful Balloons, Creams and Anniversary Cakes instead of Meteorites. The main reward was the new general Jormungand instead of Legendary Chests.

An event named Happy Thanksgiving Day was introduced in November 2020. It had the exact same rules and rewards as the previous Meteorite event, but Meteorites were reskinned as Acorns, Pumpkins, Corn, and Turkeys (the latter replacing the Gold Meteorites).

An event named Valentine's Day was introduced in February 2021. It had the exact same rules but slightly different rewards compared to the previous Meteorite event, and Meteorites were reskinned as Red, Yellow, Blue and Rainbow Roses (the latter replacing the Gold Meteorites).