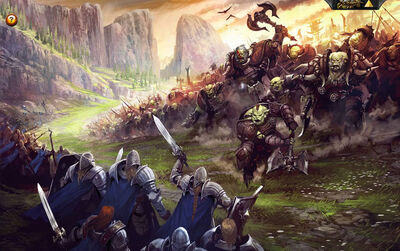 Orc Band is a monster that may randomly appear following a normal explore in Land of Mist instead of the usually generated monsters. There are three types of Orc monsters - Orc Band, Orc Horde and Orc Host. The level of orc monster generated depends on your average level of guild member. Guild Level 12 or lower may also be restricted to only the Orc Band (needs to be confirmed). Orc Band will be generated If your guild membership average level is below lvl 700. You can calculate your average guild member level HERE.

You have 168 hours to defeat the Orc Band before it flees.

Participants: all guild members can join but only 40 people above level 90+ are allowed.

This battle uses the Monster Class system. The Defense breakpoint is unknown.

While fighting Orc Band, there are ? siege weapons that can be launched to deal extra damage. All Siege Weapons hit Orc Band and are unaffected by blocks and resistances.

Retrieved from "https://castleage.fandom.com/wiki/Orc_Band?oldid=85768"
Community content is available under CC-BY-SA unless otherwise noted.