This article is about the monster. For the soldier, see Ragnarok (soldier) 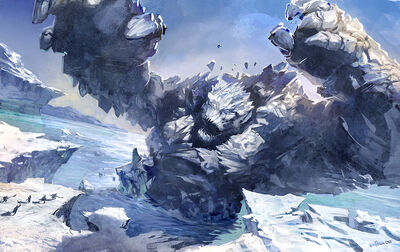 Ragnarok, the Ice Elemental can be summoned on the Alchemy Summons page if you have an

Ice Orb and are at least level 80.

Participants: up to 220 people total, with the following distribution:

This battle features a system containing a monster shield, like Skaar Deathrune. Ragnarok's Ice Shield starts at 60% right after you summoned him. The more you reduce the shield, the more damage you deal. If the shield is full, you cannot attack him. You can cast Dispel to destroy his shield. A higher player Defense stat will allow you to do more damage to his monster shield.

While fighting Ragnarok, there are 5 siege weapons that can be launched to deal extra damage.
All Siege Weapons hit Ragnarok and are unaffected by blocks and resistances.
*Ragnarok has 99,000,000 HP

"I, Ragnarok, will protect the northlands of Icepeake!"

You have summoned Ragnarok. Request for assistance with this battle with a call to arms! Defeat Ragnarok, The Ice Elemental now!

You have summoned the Ragnarok, The Ice Elemental, now request for assistance with this battle with a call to arms!

The air around you is so cold, it makes it hard to breathe. Ragnarok continues its onslaught on your army. Ragnarok seems determined to protect Icepeake. What is making it so difficult to defeat Ragnarok is its thick glacial armor. It seems your weapons have little or no effect. Broken arrows and bent swords are strewn across the battlefield. Most of the army is stricken with severe frostbite. There must be a way to take down the glacial armor and find the elemental monster's soul stone.

You: "There must be a way to take down that glacial armor. Celesta would it be possible to concentrate your fire-based spells on Ragnarok?"

Celesta: "I can do my best but I doubt my spells by itself will be powerful enough to affect Ragnarok. However, if you can summon a greater phoenix, I may be able to channel the fire element within the magical creature and amplify the effect of my spell."

You close your eyes and do your best to block out the chilling wind blowing against your face. You focus in on the image of your greater phoenix. You call out to the phoenix from within your mind and try to form a connection between yourself and the magical creature. In an instant, a glowing warmth appears around you, instantly dispelling the cold atmosphere. The greater phoenix has appeared! The massive creature spreads its wings, which are about the length of six grown adult men, and lets out a great cry. It is quite a site to behold such a large and powerful magical creature.

You: "Thank you for coming my friend. Please lend me you power to help me defeat this elemental."

The greater phoenix squawks in agreement and lowers its head close to the ground. Celesta nods her head to affirm. She lightly places her hand on the phoenix's head and begins to whisper a magical incantation. You can feel the air around you get warmer and warmer. You would think that it would start to burn but it is a comforting and inviting sense of warmth. In a bright flash of light, the greater phoenix disappears. A wisp of smoke and the smell of sulfur remains in the air. A tiny phoenix the size of a large common cat flaps its wings in the place where the majestic phoenix was just moments ago. You turn your vision towards Celesta and see a burning energy emanating from her eyes. You step back and brace yourself.

Celesta again begins to murmur a magical incantation, and in an instant, a searing fireball leaves her hands and flies towards Ragnarok. The fireball hits Ragnarok square in the chest and the elemental roars in great pain and anguish. From the point of impact there is a large crater within its glacial armor. From that crater you can see large fissures open up. It seems like multiple avalanches are starting all over Ragnarok's body. The elemental continues to roar in pain. Sheets of ice start to fall towards the ground from the elemental's body and your men run for cover to avoid being crushed by the massive bodies of ice.

There it is! You see it! The elemental's soul stone is located on its forehead. However, there does not seem to be much time. It seems like the glacial armor is starting to reform. You grab a bow and arrow from your closest soldier and take aim. Celesta snaps her fingers and the arrow becomes lit with a flame. You steady your breath and pull the arrow back. You let it fly! The arrows cuts through the cold air. A direct hit to the elemental's soul stone!

Ragnarok unleashes a deafening roar. Sheets of ice begin to fall into the frigid ocean waters below. Ragnarok begins to sink into the watery depths and in an instant Ragnarok is gone.

You let out a deep sigh and you see your breath condense into a small cloud. You suddenly feel a small weight on your shoulder. Its the reincarnated phoenix, now in its smaller form. It lets out a small chirp and you crack with a small smile in return. 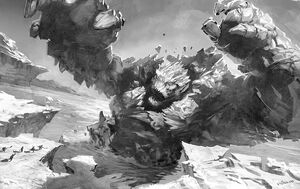 Ragnararok drops up to 2 legendaries since the introduction of Aetherfury Catalyst, but there is not data enough to talk about accurate thresholds. Loot thresholds for 99%:

Retrieved from "https://castleage.fandom.com/wiki/Ragnarok,_the_Ice_Elemental?oldid=86705"
Community content is available under CC-BY-SA unless otherwise noted.