Samael, Wraith Legionnaire can be summoned on the Alchemy Summons page if you have 50 energy on hand and are at least level 450.

Participants: up to 160 people total, with the following distribution:

You can see your stance in the "General Alliance" tab; it is your main general's level + the levels of its allied generals that share his/her type (aggresive, balanced or defensive).


B) Your stance is lower than the monster's stance:
- You don't get Contribution Points.
- You don't fill any of the bars above (Damage, Critical, Decay)

Levels 2-MAX not verified Decay starts at -5.0 per second, and decreases with successful attacks with a balanced general.

While fighting Samael, there are 5 siege weapons that can be launched to deal extra damage.
All Siege Weapons hit Samael and are unaffected by blocks and resistances.
*Samael has 1,140,000,000 HP

Long ago, Dragons ruled Valeria. There were dragons before humans and elves built their cities, before Mephistopheles gathered his demon army, before even the demigods themselves existed. In the dawn of the world, dragons made themselves a mighty empire. They made fortress cities, underground vaults to house their experiments but no temples for there were no gods in those days. Under the High Lord of the dragons, Thanatos, the draconic empire spread across all of Valaria but dragons being dragons, they were still not content. Some developed a plan to focus their magic and create a being of pure power, one that would uplift the dragon race and bring them to even greater heights of power. They proposed to create a god.

There was resistance, of course, Thantos and dragons loyal to him fought against these dragon priests but they were too slow. The dragon priests completed their ritual and Samael was born. As a god born in a time of strife and conflict, Samael was not a merciful diety and those fighting against him swiftly felt his wrath. Thanatos was slain, his body left to rot, and those that followed him were cursed to be nothing more then feral beasts.

However, the promised apotheosis of the dragon race ran into a problem. The civil war had damaged the land and the power necessary to uplift the draconic race would not return for millennium. Samael had a solution; the dragons would follow him into the void where time did not exist. When the flows of magic were restored, he would lead the dragons back to Valaria and complete the task which he started thousands of years ago. First, he would send a herald to see if the flows of magic had repaired themselves and then he would return with a host of his loyal worshipers.

This ancient history became relevant when you slew Vargulis. As you discovered, Vargulis was the herald of Samael and he had already reported that this land was rich in magic and ready for Samael and the other dragons to return. You stopped Vargulis but you could not prevent him from summoning his master and now Samael has returned.

With a chosen handful of dragons, Samael arrives. His form tricks the eyes, to you he looks vaguely human as your mind struggles to construct an familiar image for the raw power in front of you but occasionally you get a glimpse of his true form, a vast well of magic which his physical form is only a small fraction. Waves of mental commands assault your mind, ordering you to kneel in awe and submit to the god of all dragons. But you and your allies are made of sterner stuff.

Samaels very power is his weak point. As a creature tied to the flows of magic, he relies upon them in order to manifest. If you can hold him off long enough, you can disrupt the ley lines in this battlefield and banish him back to the void. All that you have to do is withstand an angry god and his chosen minions while your wizards allies perform a feat of magic never before attempted. And you were worried that this might be hard.

Samaels dragon worshipers assault your allies leaving only you to hold off the wrath of an angry god. But this is not the first time, you have fought a god. With the weapons you have collected and your natural talent, you manage to delay Samael long enough for your wizards to disrupt the magic sustaining him. In his arrogance, he never even considered the possibility that you could win and with a surprised cry of dismay, you banish him back into the void leaving you to reap the rewards of the battle. 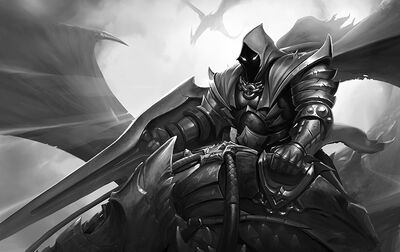 Retrieved from "https://castleage.fandom.com/wiki/Samael,_Wraith_Legionnaire?oldid=86729"
Community content is available under CC-BY-SA unless otherwise noted.