This article is about the monster. For the hero, see Skaar Deathrune (hero) 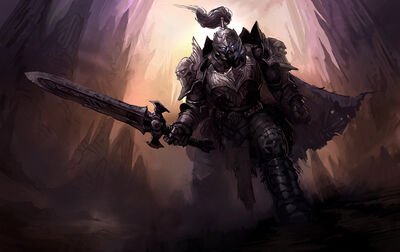 Skaar Deathrune is an Epic Boss that can be summoned on the Alchemy Summons page if you have an Orb of Skaar Deathrune which comes from the special mission in the Underworld.

You have 95 hours 50 minutes to defeat Skaar until he flees.

Participants: up to 220 people total, with the following distribution:

This monster features a system similar to the Battle of the Dark Legion's castle defense. Skaar has a mana forcefield, which starts at 60% of a maximum of 6 million. If Skaar Deathrune's Mana Forcefield is zero, you can attack for more. If your Skaar's Mana Forcefield is full, you cannot attack him. You can cast Dispel spending energy to lower his forcefield depending. A higher player Defense stat will allow you to do more damage to his forcefield.

Before the Quest: Confrontation

The death knight approaches you and you can tell that you are not welcome within his abode. You grip your weapon and prepare for the inevitable attack.

Skaar: "Young warrior, I have been waiting for you. Lord Mephistopheles told me that you would end up here. Unfortunately for you, this will be your last stop."

You: "Mephistopheles??? He's still alive? But I destroyed him with the Holy Avenger. He is no more. I don't believe you!"

You: Not a chance death knight. Now that I know Mephistopheles is alive, I will stop at nothing to stop him and end his reign of terror!

Skaar: "If you truly believe you can do that, you are going to have to defeat me first, foolish warrior. Prepare for your end!"

You grip your weapon tightly. You feel the sweat roll down your forehead and prepare for Skaar's attack. He rushes toward you! Fortunately for you, his speed is nothing like Mephistopheles's other henchman. You sidestep Skaar's strike with ease and prepare your counterattack. You bring your blade above your head and aim for Skaar's back which he has just exposed. This will be a critical blow to your foe. With a sudden force, your weapon is repelled. What did Skaar do? He didn't counterattack and it was a sure opening.

Skaar: "Hahaha. You thought I would be so foolish as to let you injure me with such ease? My Mana Forcefield protects me from weak attacks like that! You have no chance against me foolish warrior!"

Celesta: "We must find a way to dispel the Mana Forcefield. Otherwise, we are at a large disadvantage!"

How will you dispel the Mana Forcefield?

"You are foolish if you think you can stop Lord Mephistopheles!"

You have summoned the Skaar Deathrune, now request for assistance with this battle with a call to arms!

Before you have a chance to think about how to breach Skaar's Mana Forcefield, he brings his huge great sword down upon you. You avoid it and again try to counterattack but it is no use! The Mana Forcefield easily deflects your attack and leaves your hands numb. If you can't hurt Skaar, this battle will end quickly.

You: "Celesta, isn't there anything you can do to take dispel the Mana Forcefield?"

Celesta: "This magic is unlike anything I have seen before. I can try but I am not sure what the result will be."

Celesta speaks a magical incantation softly and a pale yellow glow starts to build around her hands. All of a sudden a beam of light shoots from her hands and hits Skaar's forcefield. The Mana Forcefield becomes visible and flickers for a bit. However, after a little bit the forcefield seems to be back up again.

Celesta: "It looks like the Dispel spell is only effective for a limited amount of time. You'll have to look for an opening while I continue to cast Dispel."

Now is the time for your counter attack. Celesta again murmurs the magical language to cast Dispel. You swing your blade at Skaar but the Mana Forcefield slows the attack enough that the attack doesn't affect Skaar. The Forcefield flickers a bit. Is this an opening from Celesta's Dispel? You quickly reverse the direction of your blade swing and bring your blade towards Skaar's hip. This time your blade is not repelled. Skaar narrowly sidesteps your strike.

Skaar: "My forcefield! That witch! It must be her."

Skaar diverts his attention away from you and now starts his charge towards Celesta. You must get there in time. You spring forward on a trajectory to intercept Skaar. You swing your blade and it is again stopped by the Mana Forcefield. However, it flickers again. It is down! This is your chance. Skaar raises his blade over his head and aims torwards Celesta's head.

Skaar's blade is mere inches away from Celesta but yet he has stopped for some reason. Skaar stumbles backward and it is now apparent why he stopped. Your weapon has penetrated Skaar from the back and has exited out the front of his chest. Skaar crashes down to his knees.

Skaar: "It seems I have underestimated the human that defeated Lord Mephistopheles….your end will still come foolish warrior…."

Skaar slumps down to the ground and in a flash of light he's gone. In its place is a portal. Where will this portal lead? Who knows? The only thing you do know is that it is a chance for you to get home to Valeria.

You step through the portal……. 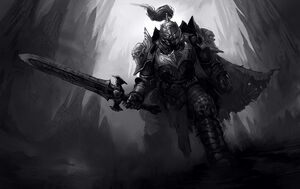 You can check the loot drop rates on this chart: Skaar Deathrune.

Warning: These charts are based on a relatively small dataset and the numbers might be off.

Retrieved from "https://castleage.fandom.com/wiki/Skaar_Deathrune?oldid=86885"
Community content is available under CC-BY-SA unless otherwise noted.