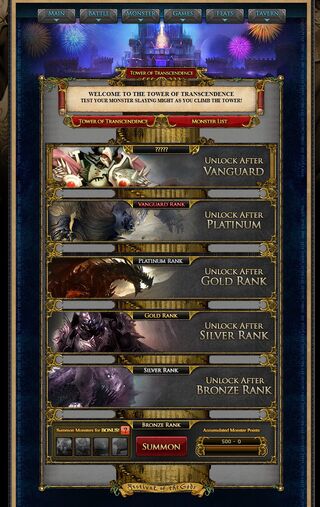 Both Tower of Transcendence Towers were removed from the game May 11, 2016

TEST YOUR MONSTER SLAYING MIGHT AS YOU CLIMB THE TOWER!


Tower of Transcendence is an event under the Castle Age Festival where players fight various monsters in a "tower-climbing" style challenge. The higher the rank, the harder the monsters with the highest rank unlocking a monster battle with Agamemnon, the Overseer.

The monsters must be summoned at the Tower of Transcendence Festival page for them to count as a Festival monster. Festival Monsters are summoned randomly but require no ingredients to summon, unlike their normal versions. Players can only summon 1 festival monster at a time. Once a monster is dead, the summoner must wait 24 hours before he can summon another one. If a monster flees without dying, a new monster can be summoned immediately. Festival monsters have slightly more time alloted to defeat than standard monsters.

Festival mosters do not count towards Gold Medals, but they do count towards achievements. Defeating a monster awards players with monster points to go with the standard loot and guild points for that monster.

Accumulating enough monster points for a floor/rank unlocks the next one. There are 4 monster fights per floor, excluding the top floor which only has 1 monster fight available.

Additionally, players are awarded a bonus skill point per floor if they are the summoner and they contribute a significant portion of damage when defeating all 4 monsters of that floor.

The damage cited as being needed to be done must come from stamina usage only, similar to Gold Medal runs. Activity contributions that use energy (fortifying, dispelling, strengthening, healing, crippling, and deflection) do not count towards the numbers needed.

Players can only unlock higher ranks by completing the points requirement from a floor 1 rank below. Example: to unlock Platinum rank, players must kill and collect points from Gold monsters. They cannot unlock it by continuously beating Silver, Bronze or Vanguard monsters.

Players who participate in summons of other higher than their own rank can accumulate points but it won't be shown as their floor is not yet unlocked. Once they obtain the necessary amount of points needed to unlock the rank, they will be eligible to summon on that rank regardless if ranks are skipped in between. Example: if a player keeps on slaying Gold rank monsters summoned by other players, Platinum rank will be unlocked even if they haven't cleared Silver rank yet.

It's worth noting that unlocking only makes players eligible to summon Festival monsters of different ranks. They can still fight any ranked monster summoned by other players.

Note: Only damage is taken into consideration when calculating the minimum damage required to get points. Heal/Defense/Deflect points will not be taken into account.

Retrieved from "https://castleage.fandom.com/wiki/Tower_of_Transcendence?oldid=74452"
Community content is available under CC-BY-SA unless otherwise noted.