This article is about the monster. For the hero, see Vincent (hero) 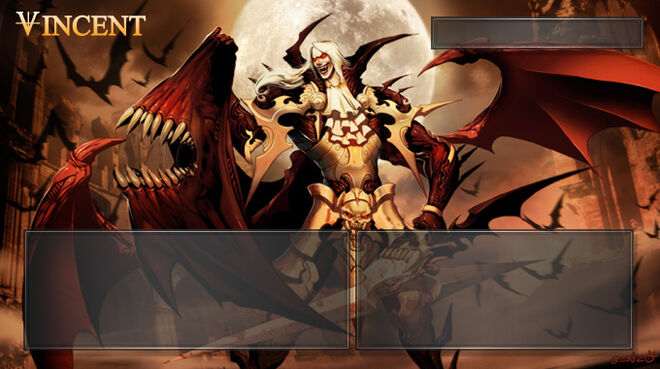 Vincent can be summoned by spending 200 energy on the Guild Monster page. Guild members contribute 20 energy per click, for which they are rewarded with gold and experience points.

Vincent is fought similar to Guild Battles. Only members of the summoning guild can fight Vincent and his army. Each guild member's class is set when Vincent is summoned. Vincent and his minions will not fight back against the attacking guild, although guild members can still lose to any member of Vincent's army if they have low attack/defense stats.

Your stats only determine if you will win or lose your duels, like in a conventional guild battle. Damage/Stamina ratio is the same for everyone regardless of stats, and the only damage modifier applied is due to the Rogue ability (+100/stamina), Deianira (+200/stamina for guild monsters, unlike the +20/stamina for guild battles), Gabrielle (+30/stamina), or Deshara (+40/stamina if rogue as class).

Vincent has significantly less health than Alpha Vincent and is much easier to hit.

While fighting Vincent, there are 5 siege weapons that can be launched to deal extra damage.
All Siege Weapons hit Vincent and are unaffected by blocks and resistances.
*Vincent has 487,500 HP

Retrieved from "https://castleage.fandom.com/wiki/Vincent?oldid=81841"
Community content is available under CC-BY-SA unless otherwise noted.