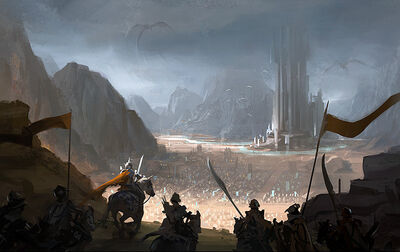 War of the Red Plains can be summoned on the Alchemy Summons page if you have a Zenarean Crest and are at least level 150.

You have 168 hours to complete the battle before it ends up in failure.

Use this text string to post kills needed in monster chat:

Participants: up to 135 people total, with the following distribution:

The amount of damage dealt is different with Smite than Tactics. Tactics used to be better choice, but lately Smite seems to deal more damage (unless your Attack is below breakpoint)

This is the first battle that offers a third option for fighting against "Monster"; it uses stamina in the same amount than regular attacks. When using Tactics you will attack with your War Council.
Tha amount of members available to fight in your War Council depends on the status of the Health bar: from 1 member when it is empty or close to empty to all 7 when it is maxed or close to maximum.
From left to right, if you/your General wins their individual fight, you will deal X% bonus damage above and beyond a minimum baseline amount:

Tactics is not available for iOS players.

War of the Red Plains Won

This is a historic recounting of the War of the Red Plains, a war between Valerians and Zenareans.

The War of the Red Plains broke out shortly after the first invasion of Mephistopheles. Mephistopheles' reign of terror had wide-reaching effects, across the borders and lands of many nations, including Valeria and Zenarea.

While the Valerians were busy formulating plans to banish the evil demon from the land, the Zenareans had to deal with the famine that was sweeping their land. Zenarea, a much smaller landmass than Valeria, had a majority of its farmland destroyed in the invasion, leaving many of the population without grain. The shortage of food caused an uproar in the general population and the Zenarean Empire was forced to take action.

Meanwhile, the Valerians, with most of their military forces depleted by the invasion, made requests to the Zenarean government for military aid in defeating Mephistopheles. Left unchecked, Mephistopheles would enslave mankind. In the eyes of Valeria, there should be no higher priority. For months, the requests were left unanswered. Valeria decided to send a scouting party to the Zenarean continent to make one final request for help.

With that decree, during the unusually cold summer of the sixth Season of Lunar Nights, the Valerian army marched towards Zenarea. Due to the harsh winter, the Valerian army did not reach the Zenarean territory until the second Season of Red Moons. Upon reaching the border, Zenareans were already engaged in skirmishes with Valerian villagers. The marching Valerian army quickly dispatched the rogue squadrons of Zenareanss. The small skirmishes between Valerians and Zenareans soon escalated into a large-scale battle at the White Plains of Outer Zenarea. The casualties on both sides were high. Both sides were forced to battle in the biting cold and the lack of supplies and food for both sides made the armies ill-prepared for the trying times of war.

The war waged on for seven years, with neither side being able to gain an advantage over the other. The casualties kept on mounting and it seemed that there would be no end in sight. Then, on that fateful day of the seventh Season of High Tides, reports sprang up throughout the continent about rifts opening up, unleashing denizens from hell and angels from the heavens. Aurora, the mighty demigoddess of Health, knew that Mephistopheles would once again enter the world of man. It seemed the Valerian squadron sent to vanquish Mephistopheles had failed. Although the demigods rarely interfere in the matters of man, Aurora knew that she had to end the war between the Valerians and Zenareans and prepare them for the impending invasion of Mephistopheles.

As the Valerians and Zenareans prepared for another battle at the White Plains, Aurora descended onto the battlefield. Soldiers from both sides stood in awe at the beauty and power of the powerful demigoddess. Aurora informed both sides of the impending danger approaching mankind and if the Valerians and Zenareans continued to wage war, it would have meant the certain end of mankind. With those words, both sides relinquished their arms. A truce was signed between the Valerian High Council and the Zenarean Empire. The war had lasted so long, that few remembered why it had occurred in the first place. In the following seasons, both Valerians and Zenareans prepared their continents for the impending war between the armies of man and the armies of the Demon King Mephistopheles. The outcome of that war will need to be recorded and recounted at another time.

Footnote: Legend says from the day the truce was signed between the Valerians and Zenareans, the White Plains only sprouted red grass. Some suggest it was due to all the blood spilled on that battlefield. Others believe that the truce between the Valerians and Zenareans was signed by the blood of both the Valerian High Council and the Zenarean Royalty. From that day forth, the White Plains of Outer Zenarea have been called the Red Plains.

Rewards while fighting War of the Red Plains

When attacking, using a 5 stamina attack as a baseline:

When using your energy, using a 10 energy action as a baseline:

Rewards after fighting War of the Red Plains 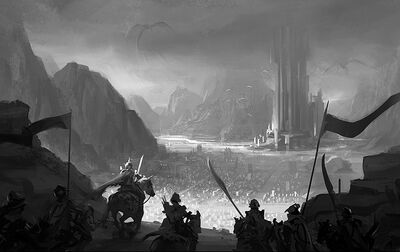 Please note we are talking about 95% threshold instead of 99%, as there are lots of results in the spreadsheet with 0 or 1 Epic drops after dealing a lot of damage. We need more data.

Chances for Legendary, obsolete but helpful:

Retrieved from "https://castleage.fandom.com/wiki/War_of_the_Red_Plains?oldid=86709"
Community content is available under CC-BY-SA unless otherwise noted.